All human beings experience the waking, dreaming, and sleeping states, but only a fortunate few—the yogis—attain the fourth state, called turiya. These rare ones reach the summit and have a profound view of all states experienced by human beings. The aspirant who has attained such a lofty state is rare and knows the mystery of life here and hereafter. Nothing remains unknown to him. Such a great yogi does not belong to any caste, religion, sex, or ethnic group, because he has already transcended all such superficial limitations. The knowledge that enlightens such an aspirant is called Tripura Rahasya.

Tripura Rahasya is one of the most significant scriptures in the tradition of tantra yoga.

The text by the same name is one of the most significant scriptures in the tradition of tantra yoga. Its beauty lies in the fact that it expounds the lofty knowledge of inner truth while systematically offering practical instructions on shakti sadhana. In shakti sadhana, the aspirant learns to apply all of his resources to the task of awakening the dormant fire within and leading it to higher awareness, finally reaching the highest chakra, the thousand-petaled lotus. In advanced stages of practice, the aspirant knows all about his future, even in the next life. This is the glory of shakti sadhana.

The Schools of Shakti Sadhana

There are three main schools of shakti sadhana: kaula, mishra, and samaya, which correspond to the mental state and preparedness of the aspirant. All are concerned with awakening the kundalini energy from its dormant state at the base of the spine and leading it to the crown chakra.

Kaula is a highly systematic method of spiritual discipline that uses objects—such as yantras and mandalas—as a means of spiritual unfoldment, incorporating them into complex rituals designed to bring the senses under control. Adherents of this school concentrate on awakening the divine force latent in the muladhara chakra (the root chakra).

Mishra means “combination.” It is a midpoint between kaula and samaya, and it is here that the student begins the transition from external to internal worship. In this school, the student masters the symbolic meaning of the yantras and mandalas and learns to internalize them with devotion. The master imparts the systematic method of leading the kundalini force to the anahata chakra, the heart center, which becomes the center of concentration.

When the aspirant attains samaya, he feels as though he is walking in Brahman-consciousness all the time.

Samaya is the highest of the three schools and is practiced only by accomplished yogis. The word samaya means “I am with you.” When the aspirant attains this state, he feels as though he is walking in Brahman-consciousness all the time. His japa becomes ajapa japa—spontaneous and effortless. Even in deep sleep, he remains aware of his mantra, because mantra becomes the predominant factor in all activities of life.

This school leads the aspirant directly to moksha, liberation. At this stage, the body is regarded as a living shrine in which the divine force dwells. All practices are internal. No internal method, such as contemplation or meditation, can be accomplished without establishing perfect harmony between the mind and the breath, so the aspirant is given breathing practices to establish this harmony.

When the aspirant is fully prepared and yet still encounters obstacles, the master bestows his grace. Through his kind touch or gaze, the master gives the aspirant his power. This rare occurrence is called shaktipata. It is not possible to bestow shaktipata on the masses, as a few modern teachers pretend to do.

In all three schools of shakti sadhana, the awakening of kundalini shakti is the central theme, and initiation is given step by step. The highest initiation is called mahavedha. In mahavedha, the final knot of ignorance is cut asunder and the aspirant has access to the highest knowledge.

The Path of Tantra

The technique of attaining the goal of shakti sadhana is called tantra. This is a method of helping one to realize the atman—the highest self. Etymologically, the word is derived from the verb tan, which means “expansion” or “introduction,” and the suffix tra, which means “protection” or “guide.” Thus, tantra is the path of sadhana that leads an aspirant to the highest state of protection, which is the highest state of attainment. Tantric scriptures expound the multifarious meaning of all the tattvas (principles), from the Absolute to the manifest world, including the science of mantra.

The philosophy of Sankhya is related to shakti sadhana or agama scriptures. Agama furnishes three types of evidence—direct experience, inference, and the sayings of the adepts—as does shakti sadhana. Sankhya also accepts the teachings of the Vedas. According to Sankhya, one can attain freedom from sorrow and pain by knowing tattva jnana, the knowledge of both the gross and subtle forms of the universe.

The profound knowledge of life here and hereafter is attained through sadhana.

The profound knowledge of life here and hereafter is attained through sadhana. An aspirant knows that there is nothing that actually goes to complete annihilation. No object is subject to destruction; that which we call death is a change of the form and name of that which is considered to be dead. When the body drops, the individual soul is still carried by the vehicle manufactured by desires (the unconscious mind). As long as it drives that vehicle, it is called the individual soul. The moment it drops that vehicle, it becomes one with the Absolute, in the same way that a river meets the ocean and becomes one with it.

In the Tripura Rahasya, the dialogue between the sages Dattatreya and Parashurama leads the aspirant to know what is duality and what is Absolute, One Without Second—what is dvaita and what is advaita. The state of advaita cannot be discussed, but can only be realized. Discussions are possible only in the state of duality.

In the next installment of this series, we’ll delve into the study of this scripture and meet Parashurama and Dattatreya. 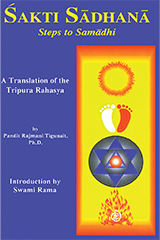 Pandit Tigunait’s translation of the Tripura Rahasya is a journey through the states of consciousness encountered on the path to ultimate self-awareness, written in a manner that makes it easily digestible for the Western reader. Sakti Sadhana is one of the most vivid and well written Vedic translations available in modern times, and an essential read for the dedicated spiritual seeker.