Meditation teaches one how to be; it is an inward method for knowing oneself on all levels and for experiencing the higher levels of consciousness.

Meditation neither rejects nor recognizes any particular religion.

The word meditation has been used by various religions, but not with its proper meaning: real meditation is entirely different from the sense in which the word is used by religionists. The different religious groups of the world give people a code for what to do and what not to do, but the question of how to be remains unanswered.

In the English dictionary the word meditation has not been adequately explained as yet. It is defined as meaning “to ruminate on,” “to reflect upon,” or “to contemplate”—that’s all. But in the Sanskrit, Tibetan, Chinese, and Japanese languages, the word meditation has been used in a very clear way: it means “to make the mind free from disturbing thoughts.” Meditation is a method that makes one aware of the highest reality.” This is an inward journey from the gross, to the subtle, to the subtlest aspect of one’s being.

The purpose of meditation is to lead one to the center of consciousness, from where consciousness flows in various degrees and grades. Meditation is a method that leads one inward by stilling the mind. There is no other way of education that helps one to know oneself on all levels. There is no religion that does this, either. And if there is any philosophy that speaks of this, it is not helpful, because it is purely theoretical without any practical application or instruction. “Know thyself” is the aim of everyone’s life, and for that, one must practice an inward method. The ancients of all great cultures of the world knew the method of meditation, but modern humanity is lost in the charms and attractions of materialism. This is a self-created misery.

Meditation leads one inward by stilling the mind.

Meditation is also not hypnosis. Hypnosis imposes control on the mind, and then one is not oneself, whereas meditation is a self-reliant method of inner study that does not rely on anyone else leading you into a particular state. Meditation is going within, beneath all these different forms and names.

The purpose of meditation is to lead one to unity—to a realization that we are all breathing the same air and that there is only one proprietor who is giving the same vitality to you and me. In meditation, one learns the process that makes one aware of the unity of life, the oneness within all these multiples. In other words, meditation is an internal practice that unites rather than divides—that expands, rather than contracts, your awareness.

Source: The Theory and Practice of Meditation by Swami Rama 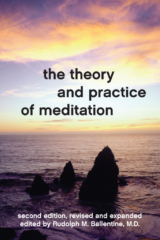 The Theory and Practice of Meditation

This classic collection of essays shares valuable insights into the nature and dynamics of meditation. The contributors to this volume are some of the best-versed scholars and health professionals in their fields. Their penetrating reflections convey a well-rounded understanding of meditation as a systematic path to achieve mental and emotional well-being and self-realization.