Lost in the Land of Devas

I had heard and read so much about a village called Jñanganj that my desire for visiting this place became intense. Many pilgrims have heard about this place, but it is rare that someone perseveres enough to reach there. This small community of spiritual people is situated deep within the lap of the Himalayas, surrounded by snowy peaks. For eight months of the year one cannot enter or come out of that place, but a small group of yogis lives there all the time. These yogis observe silence and spend most of their time in meditation. Small log houses provide shelter, and their main food is potatoes and barley, which they store for the whole year. This particular community is made up of Indian, Tibetan, and Nepalese sadhus. This small group of adepts resides on the Himalayan border between Tibet and Pithora Garh. There is no other place but this that can be called Jñanganj.

Lake of the Devil

I decided to go to Mount Kailash along with another four renunciates in order to visit this village. We went from Almora to Dharchula to Garbhyank, and after several days, when we reached Rakshastal, we lost our way. It was in the month of July, when the snow melts in the Himalayan mountains. During this season of the year the glaciers move and sometimes an entire glacier crashes down and blocks the path. For several days there may be no way to go.

Humor is an important quality that makes one cheerful in all walks of life.

As we were walking we found glaciers collapsing, blocking the way behind and in front of us. I was accustomed to such sudden calamities, but the other swamis were new to these adventures. The swamis were very much frightened. They held me responsible for this and started putting the blame on me because I was from the Himalayas. They said, “You should have known better. You are from the mountains. You misguided us. We have no food, the path is blocked, and it is very cold. We are dying here.”

We were stranded there by the side of an enormous lake, called Rakshastal, which means “Lake of the Devil.” Because of the melting snow and avalanches, the water started rising. By the second day everyone was in a panic. I said, “We are not ordinary worldly people. We are renunciates. We should die happily. Remember God. Panic is not going to help us.”

Everyone started remembering his mantra and praying, but nothing seemed to help. Here their faith was tested—but none of them had any. They were afraid of being buried in the snow. I started joking and said, “Suppose you all die? What will be the fate of your institutions, wealth, and followers?” They said, “We may be dying, but first we will see that you die.” My jokes and my taking this situation lightly made them more angry.

Very few people know how to enjoy humor. Most people become very serious in such adverse situations. Humor is an important quality that makes one cheerful in all walks of life. To cultivate this quality is very important. When the poison was given to Socrates, he was very humorous and made a few jokes. When the cup of hemlock was given to him he said, “Can I share a bit of it with the gods?” Then he smiled and said, “Poison has no power to kill a sage, for a sage lives in reality, and reality is eternal.” He smiled and took the poison.

Walking with the Devas

I said to these renunciates, “If we have to live and if we are on the right path, the Lord will protect us. Why should we worry?” It started becoming dark and again snow started falling. Suddenly a man with a long beard, wearing a white robe and carrying a lantern, appeared before us. He asked, “Have you lost your way?”

“For almost two days we have had nothing to eat, and we do not know how to get out of this place,” we replied. He told us to follow him. There had seemed to be no way through that avalanche—but when we followed him we eventually found ourselves on the other side. He showed us the way to a village that was a few miles away and instructed us to pass the night there. He then suddenly disappeared. We all wondered who he was. The villagers say that such experiences are not uncommon in this land of devas, or bright beings. These bright beings guide innocent travelers when they lose their way.

The devas are the bright beings who can travel between the known and unknown sides of life.

The shepherds with whom I traveled talked about the devas, or bright beings who guide travelers in the Himalayas. We stayed in this village that night. The next day the other four renunciates refused to travel with me. They all turned back. They did not want to go farther into the mountains because they feared more dangers. After being given directions by the villagers I went all alone toward Jñanganj. One of the sadhus there was kind enough to give me shelter, and I stayed for one and a half months. This place is surrounded by high snowy peaks and is one of the most beautiful places that I have ever seen.

Returning from Jñanganj, I came back by the way that leads to Manasarovar at the foot of Mount Kailash. I met many advanced Indian and Tibetan yogis. For a week I lived in a camp of lamas at the foot of Mount Kailash. I still treasure this experience. I traveled to Garbhyank with a herd of sheep. The shepherds with whom I traveled talked about the devas, or bright beings who guide travelers in the Himalayas. They narrated many such experiences to me. It is said that the devas are the beings who can travel between the known and unknown sides of life. They can penetrate through physical existence to guide aspirants, and yet they live in the non-physical plane. The devas, too, have their plane of existence.

Esoteric science and occultism talk much about such beings, but modern scientists dismiss this theory, saying that such beings are either fantasies or hallucinations. I have heard young scientists saying that old men who believe in the existence of such beings must be hallucinating. Old age is another childhood, which is full of follies and can give hallucinations. But spiritual people become more wise in old age. They have no chance to hallucinate, for they purify their minds first and then experience the higher levels of consciousness.

Scientists have not studied many dimensions of life as yet. They are still studying the brain and its various zones. The physical sciences have limitations, and their investigations are only on the gross levels of matter, body, and brain. The aspect of psychology that is termed transpersonal or transcendental psychology is very poorly understood by modern scientists. The perennial psychology of the ancients that has been cultivated for several centuries in the past is an exact science. It is based on the finest knowledge, which is called intuition. 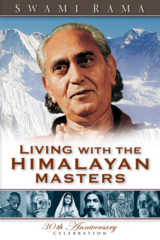 Living with the Himalayan Masters

“I will tell you how I grew up and how I was trained, about the great sages with whom I lived and what they taught me, not through lectures and books but through experiences.” —Swami Rama

Lost in the Land of Devas